Gate valve, also called plate gate valve, is mainly composed of valve body, bonnet, disc, valve stem, valve seat and sealing packing. It is one of the most common valve types in isolation valves. The main purpose of the gate valve is to cut off the fluid. For this reason, it is usually called a “cut off” valve or a “blocking” valve. The gate valve has many different structural forms, and the sealing element structure used in it is different. According to the structure of the sealing element, it can be divided into several different types. 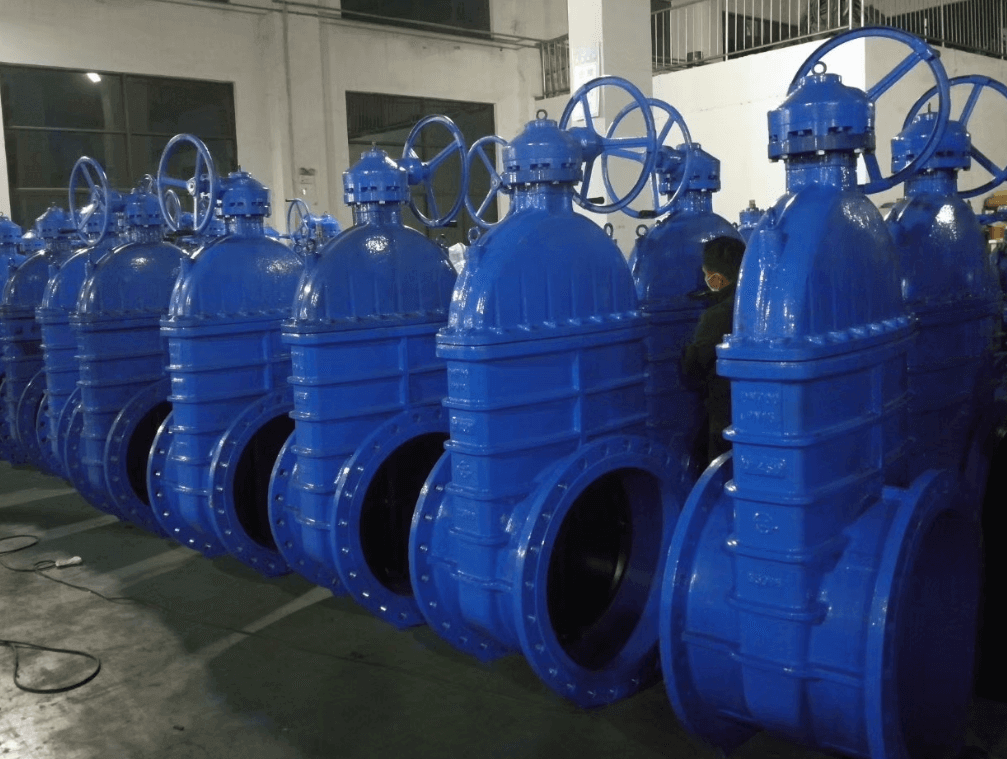 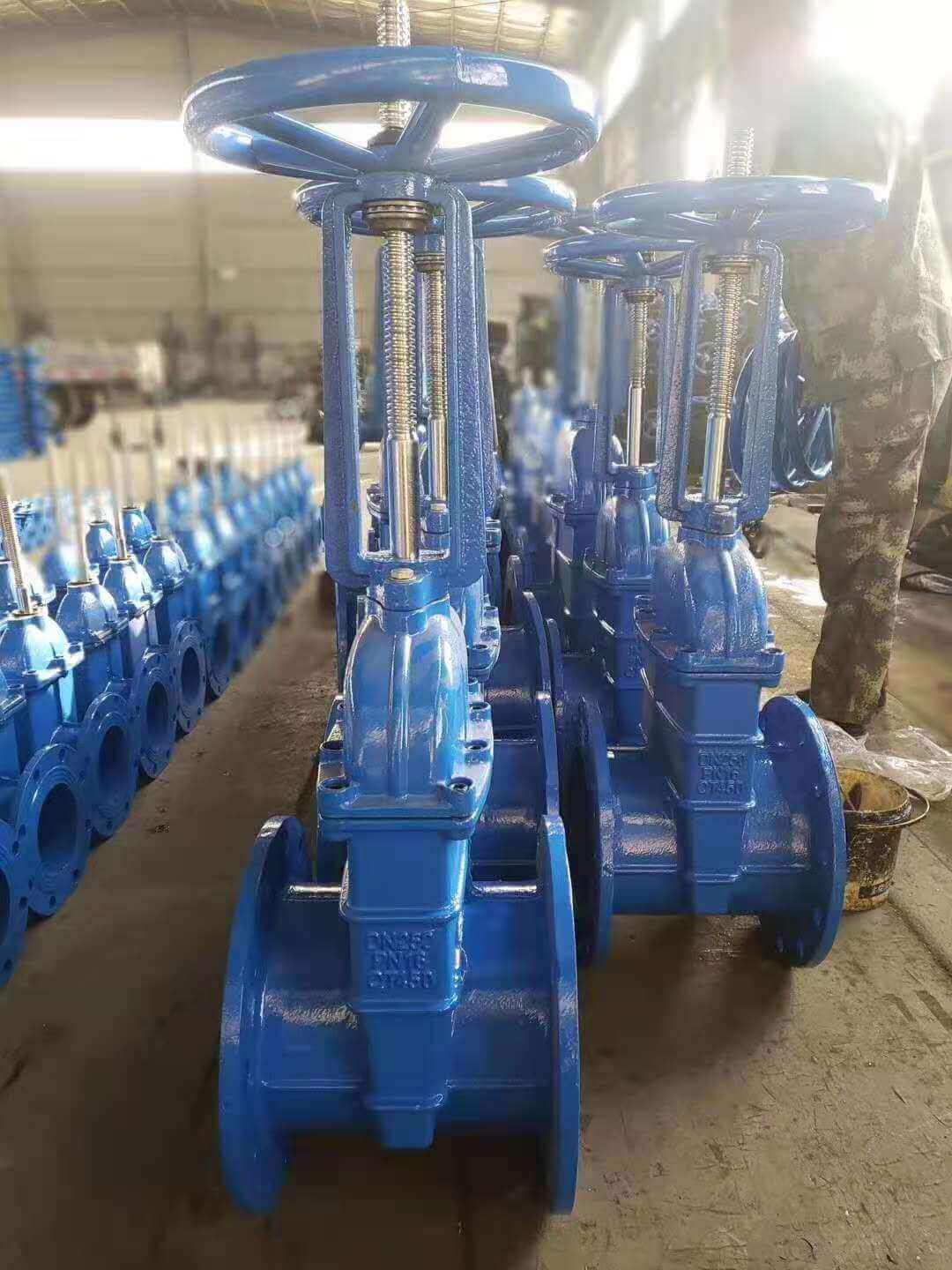 2. Non rising-stem gate valve is also called rotating stem gate valve (also called non rising-stem wedge gate valve). The stem nut is placed inside the valve body and is in direct contact with the medium and is often fixed on the disc. Through the rotation of the valve stem, the valve stem nut drives the disc to move up and down to complete the opening and closing. Usually there is a trapezoidal thread at the bottom end of the valve stem. Through the thread at the bottom end of the valve and the guide groove on the valve disc, the rotary motion is changed into linear motion, that is, the operating torque is turned into operating thrust. Since the trapezoidal thread for transmission is located inside the valve body, it is easily corroded by the medium and cannot be lubricated. The opening degree cannot be directly observed, and an indicating device is required. However, its valve stem does not move up and down, and requires small operating space, so it is suitable for occasions with limited locations and dense pipelines. 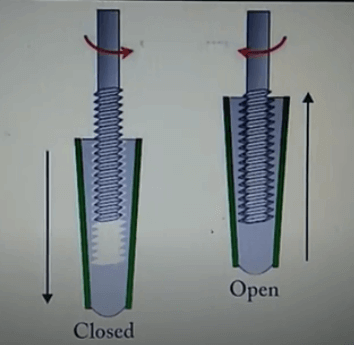 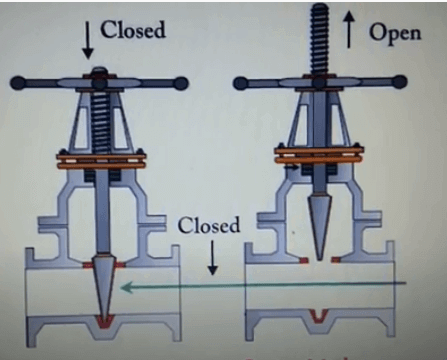 The main difference:
1. The lifting screw of the concealed rod flange gate valve only rotates and moves up and down. Only a rod is exposed. The screw cap is fixed on the disc. The disc is raised by the rotation of the screw, and there is no visible electric gate valve frame. ; The lifting screw of the rising stem flange gate valve is exposed, and the screw cap is close to the hand wheel and is fixed (not high-pressure gate valve rotation nor axial movement), the disc is improved by rotating the screw, the screw and the disc have only relative rotational movement There is no relative axial displacement, and the appearance is a gate-shaped bracket.
2. The valve stem with dark stem cannot be seen, while the stem with open stem can be seen.
3. The steering wheel and the valve stem are connected and relatively immovable when the dark stem valve is opened and closed. The valve stem rotates at a fixed point to help the valve clack move upward and downward to complete the opening and closing. The rising stem valve is driven by the turnbuckle of the valve stem and the steering wheel to raise or lower the disc.
To put it simply, the rising stem valve is that the disc and the stem move up and down together, and the steering wheel is always at a fixed point.
Is rising-stem gate valve or non rising-stem gate valve used outdoors?
For the valves installed in the outdoor valve wells, according to the experience of Tanghai valves, it is recommended that you use dark stem valves. The use of rising stem valves has the following disadvantages: 1. When the valve is opened and closed, the valve stem has to rise and fall, which takes up a lot of space. If the pipeline is not buried very deep, the valve well will hinder the opening of the valve. When the valve is opened, the valve well cover will not be closed or the valve cannot be fully opened. 2. After the number of switches is increased, the contact surface of the valve stem and the pressure flange will leak more seriously, and the packing should be replaced frequently. 3. If you don’t switch frequently, a part of the valve stem will be exposed to the valve body for a long time. In the humid environment of the valve well, the exposed valve stem is very easy to oxidize and rust. Once it needs to be closed, it will not be closed. Otherwise, grease must be applied frequently. In short, the maintenance workload is large. Dark stem valves do not have these problems, the probability of water leakage is also small, and of course the maintenance workload is also small. for reference only.

Disc has two sealing surfaces. The two sealing surfaces of the most commonly used mode disc valve form a wedge. The wedge angle varies with valve parameters, usually 50, and 2°52′ when the medium temperature is not high. The disc of the wedge gate valve can be made into a whole, called a rigid disc; it can also be made into a disc that can produce slight deformation to improve its manufacturability and make up for the deviation of the sealing surface angle during the processing. This disc is called an elastic disc .

Structural characteristics of rising-stem gate valve:
The general gate valves used on the market for a long time generally have water leakage or rust. The company introduces the elastic seat seal gate valve produced by European high-tech rubber and valve manufacturing technology, which overcomes the defects of poor sealing and rust of general gate valves. The sealing gate valve uses the compensation effect of the elastic disc to produce a small amount of elastic deformation to achieve a good sealing effect. The valve has the obvious advantages of light switch, reliable sealing, good elastic memory and service life. It can be widely used as a regulating and intercepting device on the pipelines of tap water, sewage, construction, petroleum, chemical industry, food, medicine, textile, electric power, shipbuilding, metallurgy, energy system, etc.

Features of rising-stem gate valve:
Light weight: The body is made of high-grade ductile iron, which is about 20% to 30% lighter than the traditional gate valve, and is easy to install and maintain.

Flat-bottomed gate seat: The traditional gate valve often deposits in the groove at the bottom of the valve due to foreign objects such as stones, wood, cement, iron filings, and other debris after the pipe is washed with water. The bottom of the elastic seat-sealed gate valve adopts the same flat-bottom design as the water pipe machine, which is not easy to cause debris siltation and makes the fluid flow unimpeded.

Integral encapsulation: The disc adopts high-quality rubber for the overall inner and outer rubber. European first-class rubber vulcanization technology enables the vulcanized disc to ensure accurate geometric dimensions, and the rubber and ductile disc are connected firmly, not easy to fall off, and have good elastic memory . water

Fluorine-lined valve instructions | Installation instructions
What is the material of the butterfly valve stem?
Factors Affecting the Operation and Use of resilient seated Butterfly Valves
What is the material of the main parts of the butterfly valve?-(2)
What is assembly error and how to control it?
The difference between internally and externally threaded valves