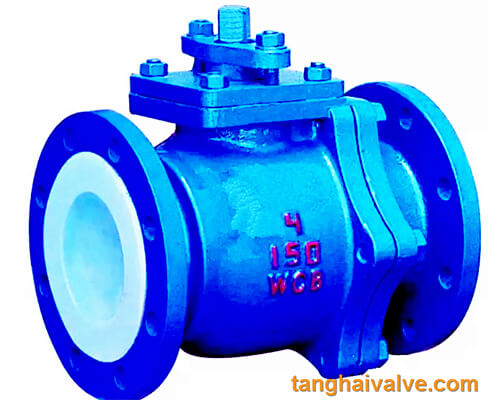 The ball can freely rotate between the two valve seats through the valve stem by means of a handle or other driving device.

Features of floating ball valve:
Under the action of the pressure difference, the ball will move slightly downstream of the valve;
The sealing performance of the ball valve mainly depends on its downstream valve seat;
The valve seat cannot move between the ball and the valve body.

Structure of fixed ball valve
1). Sphere
After introducing the various structural forms of the seal seat, I came to observe the ball structure of the same ball valve. The most important feature of the Tongding ball valve is that the ball does not deviate from the center of the sphere during the process of storing and opening. The ball I: the design of the pivot has three structural forms:
① the upper part of the sphere has a shaft, and the lower part is a shaft hole for a fixed shaft to insert. The structure of the sphere is a shaft and a hole structure.
②  there are two upper and lower shaft holes on the sphere, which are inserted by the upper shaft and the lower shaft respectively. The structure  is suitable for small diameters. The insertion depth of the hole is short, and it can only bear a small medium force. The structure  is suitable for large diameters, can bear a large medium force, and the supporting journal is separated from the drive shaft. The drive shaft only bears the effect of torque.
③ there are two extending shafts on the sphere, two supporting plates vertically up and down. The medium force is transmitted to the valve body through the journal and the supporting plate. Similarly, the drive shaft only bears a single rotation. The moment action separates the medium force and the operating moment.

As for the structure of the valve body, like the floating ball valve, there are two types: side-mounted and top-mounted.

The top-mounted valve body is an integral structure. The upper valve cover uses bolts to form a complete pressure boundary with the valve body. The ball is a ball with upper and lower support shafts. The lower support bearing is embedded in the valve body, and the upper support bearing is placed in the valve cover. , The upper shaft end is machined with a groove connected to the flange of the shaft head to transmit torque. The medium force acts on the bearing. The drive shaft only transmits torque. It is designed as a blow-out prevention structure. The design of the valve seat The difficulty of assembly or disassembly is that the valve seat must move to both sides when the ball is installed in the valve cavity. In this way, a slidable back valve seat is designed. The valve seat is retracted into the left and right channels in advance. After the ball is installed, pass the back The flange on the valve pushes the valve seat to the center of the ball, and then uses a snap ring to snap into the groove of the back valve seat. When disassembling, first take out the snap ring, and then push the valve seat into the left and right sides of the valve cavity. In the right channel, the sphere can be taken out from the upper part. Therefore, the top-mounted structural ball has the advantage of being able to be repaired online.

tanghaivalve.com Ways to Extend the Service Life of Valves