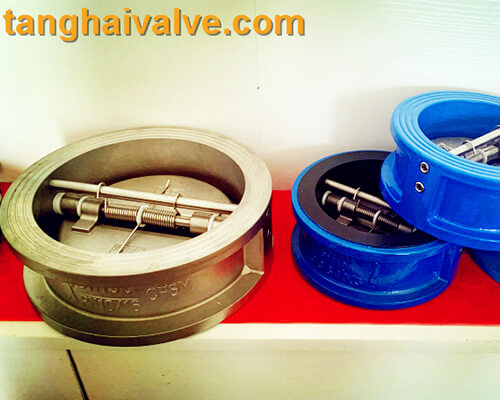 2. Improvement of lift check valve structure
The lifting check valve, also known as the bottom valve, can maintain the water column required for pumping when the pump is stopped; the feature of the valve structure improvement is that a slow closing auxiliary valve is added between the main valve flap and the valve body bracket as shown. 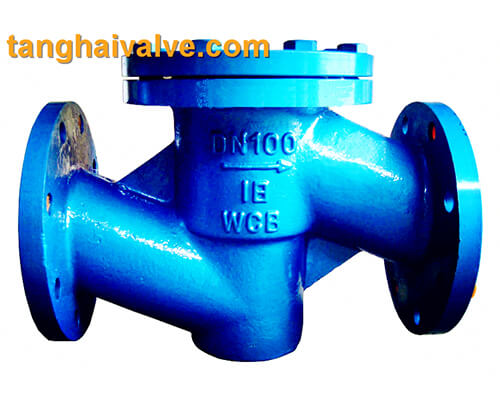 3. Test results before and after the improvement of the check valve slow closing structure
A calibrated pressure gauge is used, and the pressure signal is sent to the oscilloscope for recording by the differential pressure transmitter, and the water hammer pressure change value at each moment is read on the oscillogram with the calibrated ratio R.
The test valve has a diameter of 100mm, a system pressure of 0.5MPa, and a flow rate of 5L/s. When the pump stops suddenly, it shows the pressure-time curve of the inlet side of the check valve after the power is cut off
(1) The main valve flap opens and closes smoothly, the slow-closing auxiliary valve has a compact structure and reliable performance.
(2) The valve flap of the main valve closes first and then closes slowly, which can effectively prevent destructive water hammer and expand the use range of the check valve.
(3) The improved structure is simple and easy to produce and interchange.
(4) The slow-closing auxiliary valve can be repaired or replaced without hindering the use of the check valve.

The check valve is a valve that opens when the pipeline system is downstream and closes when it is upstream. It is mainly used to prevent backflow of the medium, prevent the pump and drive motor from reversing, and release the medium in the container. The rotary check valve with the shaft rotating and the lift check valve moving along the vertical center line of the valve body, but the valves of the above two structures both have the medium backflow speed rapidly reduced from the maximum to zero when the valve is closed, causing the pipeline The internal pressure on the side of the water inlet pipe rises rapidly, resulting in a water hammer phenomenon that has a destructive effect on the pipeline system, so the general check valve production caliber is 50 to 500 mm. In order to reduce the water hammer effect of the check valve and expand the range of use of the check valve, on the basis of the original product, a slow closing auxiliary valve was added to solve the problem of pipeline water hammer boosting.

tanghaivalve.com How to achieve internal and external anti-corrosion of pneumatic valves
Scroll to top