Globe Valve is also called stop valve, shut-off valve. The opening and closing part of the globe valve is a plug-shaped valve disc, the sealing surface is flat or cone, and the valve disc moves linearly along the centerline of the fluid. The movement form of the valve stem includes a lifting rod type (the valve stem is raised and lowered, the hand wheel does not lift), and there is a lifting rotating rod type (the hand wheel and the valve stem rotate and lift together, and the nut is set on the valve body). The stop valve is only suitable for fully open and fully closed, adjustment and throttling are not allowed.
Brief introduction to the principle of the globe valve: 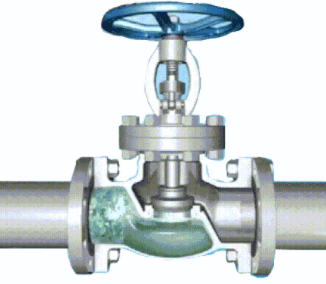 (the hand wheel and the valve stem rotate and lift together, and the nut is set on the valve body). The globe valve is a forced sealing valve, so when the valve is closed, pressure must be applied to the disc to force the sealing surface to not leak.

The working principle of the stop valve:
We assume that there is a pipe with a lid. Water flows in from the bottom of the pipe and flows out toward the nozzle. The lid of the outlet pipe is equivalent to the closing part of the shut-off valve. If the pipe lid is lifted up by hand, the water will flow out. When the cap is closed, the water stops flowing, which is equivalent to the working principle of a shut-off valve.

The shut-off valve relies on rotating the hand wheel to make the valve stem rise and fall, and drive the valve disc to make a linear displacement parallel to the flow direction of the medium to achieve the purpose of opening and closing. The handwheel rotates in a clockwise direction, and the working medium enters from the channel under the valve disc. At this time, the applied sealing force must be equal to or greater than the sum of the required specific pressure generated on the sealing surface and the upward force of the medium. 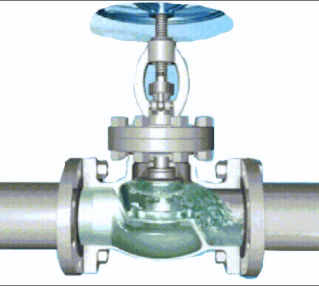